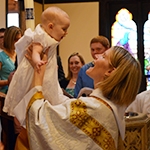 In the summer of 2011, Mary became St. Michael’s 25th Rector. She was attracted to St. Michael’s radical openness, deep prayerfulness, and authentic sense of community. Prior to coming to St. Michael’s, Mary served churches in Delaware and Hawaii.  Mary’s particular passions include emerging models of ministry, contemplative Christian practices, and ministry with children. Mary and her husband Kurt Johnson have three children, Jonah, Ori, and Beatrice, as well as a dog, Juniper Bleu and a cat, Mink. Email Mary or call (802) 254-6048, x102.

Born and raised in New York City in a blended family, she moved to Boston for many years before coming to live in Vermont in November 2018. She has studied and worked in the fields of education and psychology but a life of ministry has been an ongoing calling. She explored monastic vocation as a nun, and continues to live a semi-monastic rhythm as an Oblate of the Episcopal Order of Julian of Norwich in Wisconsin. As an original city girl, it is surprising that in midlife her favorite activities include baking bread, bird watching, very amateur gardening, hiking, and solitude. She is passionate about the life of prayer among people of faith, as well as what forms of community – new and recovered – might come alongside parishes to help people deepen their life of faith, discipleship and service. Email Adwoa at adwoa@stmichaelsvermont.org 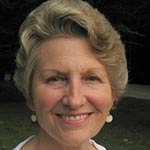 Jean served as a priest at Trinity Church in Princeton, New Jersey, for ten years. In 1990 she joined the Seamen’s Church Institute (SCI) of New York and New Jersey, where she held multiple leadership positions before being named President and Executive Director. She and her husband Peter retired in 2007 and moved to Brattleboro, where Jean serves on the board of CHABHA and as a Companion in the Diocese of Vermont. Email Jean. 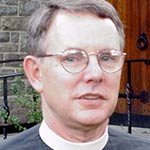 Phillip and his wife Susan retired to Putney in 2009. For the previous 22 years he was Rector of the Church of the Redeemer in Morristown, New Jersey, a self-defined “liberation community” creating a new model for what it means to be a Christian and Episcopal church. Phillip is chair of the AIDS Project of Southern Vermont. Email Philip.