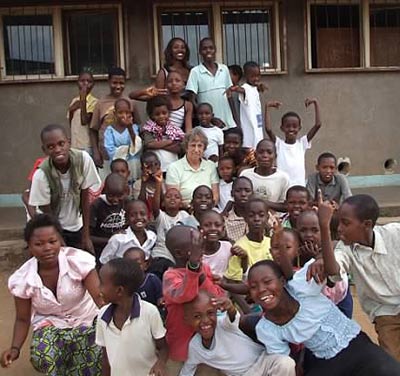 Haiti: Supported the Foyer Evangelique Orphanage administered by Pastor Dukens to purchase food, school supplies, and clothing so the children can go to school.

Supported CHABHA and hosted coin rolls to cover the costs of health cards and school fees in program that supports nearly 3000 children. Children who have grown up in their grassroots group and have finished high school, and for some, university are now working in jobs so they can support themselves and their families, thereby stopping the cycle of poverty. Contact Susan Wilson at 536-4661.

This article in the News of the Diocese tells of a recent connection between our children and children in Kigali, Rwanda.

From Brattleboro to Kigali: St. Michael’s and CHABHA connect children across borders

At the suggestion of the Outreach Team at St. Michael’s, Brattleboro, our children Skyped with children in Rwanda! It was March 1 and cold here in Vermont, but warm in Kigali.

CHABHA, Children Affected by HIV/AIDS, an organization founded in Vermont and supported by several churches in the diocese, partners with several grassroots groups in Rwanda and Burundi that help children whose parents have died from the disease or whose parents are ill. CHABHA provides health cards, school costs, after-school programming, fun-filled gatherings, home visits, and skills training. St. Michael’s furnishes CHABHA with office space and, for some years, has contributed financial support.

David Loewenguth, CHABHA Director, was finishing his three-month work with staff in Rwanda on March 1. In the afternoon, some 40 children of one CHABHA group came to the classroom rented for weekly gatherings. David and Mary Lindquist, our Rector, got the connection working. Children asked questions of one another. The first, from Rwanda, was, “Do you believe in God?” Then there were questions about animals, subjects in school, and the like. Each group sang a song to the other. The St. Michaels children sang, “This little light of mine.”

When they saw the huge icicles hanging from the eave of our classroom, the Rwandan children said, “Sorry, sorry.” We had to explain that winter could be fun, too.

After the skyping the St. Michael’s children saw slides that included photos of parishioners who have gone to Rwanda to help out. Later, our children spoke of ways to help the children they had just met more than we already do. They want to continue the Coin Rolls. Nathaniel Johnson said about the call that it was, “cool” to talk with kids so far away. He was amazed that it was so hot there, as the Rwandan children were about our icicles. Nathaniel’s older brother, Jonah, said he liked it that the children are like us because they “believe in God. They also play soccer.” He noted the differences, too. “We have what we want. They don’t. So we want to help. They don’t have computers, and they need to buy food, have houses, and have fresh water.”