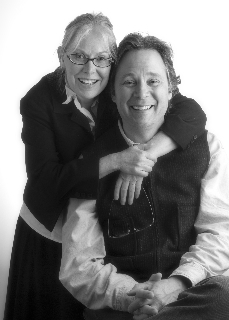 Paul’s first original theatrical score, The Great American Hero, won the David B. Marshall award from the University of Michigan in 1979. Paul was the production manager of the People’s Theater in Cambridge, Massachusetts for several years, while continuing to write theatrical scores, choral works, and songs.  His scores for the theater have been heard locally and internationally, most recently in collaborations with the Sandglass Theater, Marlboro College, and the New England Youth Theater.  His current commissions include works for the Vermont Symphony, Con Moto, and The River School. His choral score “Come Life, Shaker Life” received the Alfred Nash Patterson Award, and he is currently working on a new choral score to be directed by his wife in the spring of 2017.

Susan studied piano with Charles Fisher and Gyorgy Sandor, and was choral assistant to Maynard Klein at the University of Michigan, where – surprising to many – she also received an undergraduate degree in biochemistry and worked for a short period of time in research at the Medical School. Upon moving to Vermont, Susan joined the piano faculty at the Brattleboro Music Center, was rehearsal assistant to Blanche Moyse, and subsequently became Artistic Director of the Brattleboro Concert Choir. She has been director of chorus at Marlboro College, founder and director of both the VT Repertory Singers and the Bach Festival Children’s Chorus.  A long time church musician, Susan is currently the Director of Music at St. Michael’s Episcopal Church.